We are a small group of Christian believers who genuinely believe real change is possible with Jesus Christ, and the hands-on action of His followers. We cannot minister to every need, but we serve the One who can, and we rejoice when He invites us to be participants in His work. Click on any of the tabs below to learn more about what specific ministries we are involved in. 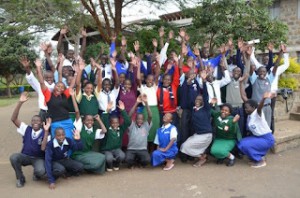 With over 100 students now in the program, we are excited to see each year’s students moving closer and closer to fulfilling their dream of obtaining a high school diploma. These students rank in the top 5% nationally, despite facing dismal circumstances. Most of these students have grown up as orphans, young heads of households, or with a single surviving parent or relative. Whether living in the slums in the city or rural villages far from the bustle of city life, all of them have fought adversity and intense poverty. As we all know, it’s trials that seem to bring out true character, and our students reveal hearts that are living for Someone other than themselves. Our first graduates will complete their studies in 2014, and you can imagine our delight. As our older students move closer to finishing high school, our younger students are just beginning. As God provides funds, we finance the following year’s various tuitions in addition to adding new students to the program.

“You have given me dignity in the society.” –written in a thank-you letter to Bridge Ministries.

This is one reason we give scholarships. By doing so, we are saying with our actions, “We believe in YOU!” And we do! That is why we invest in these students. Each scholarship consists of:

Pastor Andrew and Dr. Stephanie Onguka have the privilege of interacting with students in Kenya. They do all of our interviews, applications, scholarships, and logistical work. It’s quite a job! Let them introduce you to Lameck:
Lameck is the last born among six children. Growing up in a poor, single-parent household, he was not sure how he would be able to continue his education. Still, he pushed on in his studies and was the top performer of his district in the 8th grade standardized exams (KCPE)!!! As a result, he was “matched” with one of Kenya’s top national schools – Lenana Boys in Nairobi City. Though he didn’t have the money to pay his school fees, his elementary school teachers were so moved by his commitment and aptitude, they came together and raised enough funds for his first term at Lenana. We met Lameck because we heard about how he was about to lose his place at Lenana because his elementary school teachers could not raise the necessary US $1,000 for school fees each year. One morning last December, we sat together with Lameck at our kitchen table and learned about his life story, dreams, and trust in God that has sustained him. Because of the sacrificial giving of supporters from the USA, Lameck is one of the 75 high school students that have been enrolled into OneLife Africa discipleship and scholarship program. Lameck loves sciences and hopes to be a medical doctor or engineer. 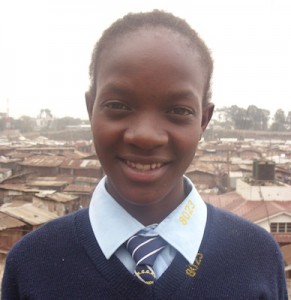 Vivian was born and raised in Mathare slums, she comes from a family of five. Both of her parents died and all of the children were left under the care of an uncle who lives in the slums. Vivian says that she misses her parents, but is also grateful that Bridge Ministries has set up a support system in Kenya through OneLife Africa. Through OLA (Bridge Ministries on-site team), Vivian feels guided by the leaders and comforted by the other students who can relate to her stuggles. She feels that she belongs and is encouraged to work hard in her education. Vivian went to school in the Mathare slum school and passed her KCPE 2010 exams. She was invited to join Chakol High school in Western Kenya and is adjusting to the new pace of boarding school life. Her favorite subject is mathematics and she hopes to become a pilot. 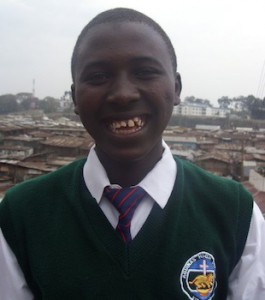 Tony was born in 1995. Both of his parents passed away when he was still very young. He and his brother were left alone and at the mercies of circumstances. Tony is soft-spoken and very observant; he is disturbed by the tribal conflicts that go on in his community.  Tony was taken in by an orphanage in Kariobangi, where he was offered a place to sleep, food and primary education. Tony performed very well in the 2010 Kenya primary national exams and was invited to join Aquinas High school in Nairobi. Because no one could help support Tony beyond primary school, he was recommended by the social workers to apply for a OneLife Africa scholarship. Tony was accepted into the OneLife Africa scholarship and mentoring program, upon which he joined Aquinas High School in January 2011. He has been performing well in his classes and is also very active during the holiday mentoring activities. Tony loves all subjects and wants to be a surgeon one day to offer care to poor and vulnerable children.

In April 2012, Tony wrote a thank you note to OneLife Africa donors and a reflection about his experience in high school which would have not been possible without Bridge Ministries’ support. Tony concluded his reflection saying: “I am very grateful for your love, care and compassion towards me, I pray to God to bless you even as you continue supporting me. I love you people and may God bless you abundantly!” 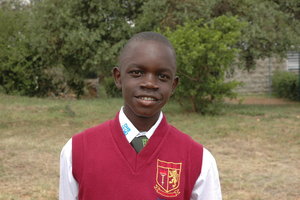 Reagan was born in 1994. His father died in a boat accident, he was taken in and raised by his uncle in Mathare slums. Despite pain, loss and hardship, Reagan is full of gratitude; his trust in the Lord has been a source of peace, stability and inspiration in his life. He enjoys social studies and hopes to use his gifts and talents to help others. Reagan scored 408 marks in KCPE 2010, becoming one of the top students from Mathare slums. During his years in primary school, he was appointed as a “Prime Minister” of Mathare children’s parliament. He gave a moving speech at the 2010 International Labor organization conference on child labor in Africa, held in Nairobi. In the words of OneLife Africa’s director, Andrew Onguka, “We are privileged to know Reagan and walk alongside him in our mentoring program as he continues with his education at Dagoretti High School. Reagan is currently thinking through different future careers. We have no doubt that Reagan has what it takes to achieve his dreams in life.”